Disclosure: I received a comp’d entrance fee to run the Iron Girl 1/2 marathon in exchange for this post.

For the past four months I’ve been training to run the Iron Girl 1/2 marathon in Clearwater.  I’ve been thinking about running this particular race ever since I drove to Clearwater last year to meet up with some friends.  A lot of hard work and sacrifice went into running this race.  Knowing that we would be running up and down the Clearwater Bridge and the Sand Key Bridge twice was my biggest fear. 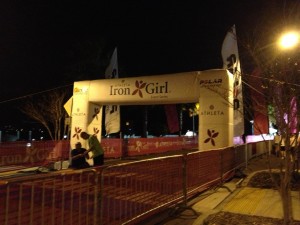 The last two weeks before the race were the hardest for me.  While running one morning, I felt a sting on my achilles.  I was terrified this would keep me from my goal of completing my second 1/2 marathon.  This meant that instead of 3 scheduled runs per week, I would take it easy and only run/walk once a week.  As a runner, this was the toughest thing to do.  Knowing you have a race coming up and staying off running was maddening.  But, boy am I glad I did! 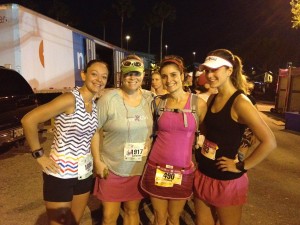 I was able to meet up with some of my running friends (Beth, Caroline and Tori) before the race.  I looked everywhere for “Aunt Nanci” because I knew starting with her would help me overcome that first bridge.  And overcome it I did.  Thanks Nanci! 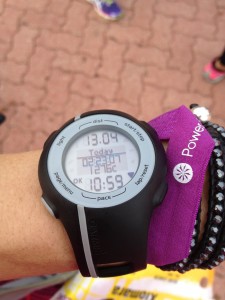 After almost 2 1/2 hours I crossed the finished line.  After all my races, I’ve always had a family member waiting for me at the finish line.  Not this time.  This time, I drove there alone but I did not finish alone.  As we were coming down the Clearwater bridge to reach the finish line, people were lined up with signs cheering us on to the finish.  Those people who I don’t know and will probably never see again were my family for that morning.  Thank you for cheering us on even as our own minds were failing us. 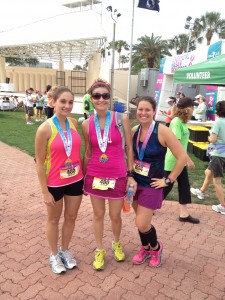 After the finish line, I bumped into some more running friends Beka and Genna.  If you are ready for a beautiful and sometimes challenging course, then the Iron Girl Clearwater might be for you.  The bridges are not easy, I’m not going to sugar coat it, but the view from up there is amazing.  I was able to “run” up them the first time around, but the second time back I ended up walking up and running down.  The course had plenty of water/gatorade stops through out the course at what felt like almost every other mile.  They also handed out powergels and my favorite: Girl Scout cookies!  That was an unexpected treat.

Overall, my favorite part was the spectators.  Those strangers who put their hands out for a high five as I was on my way back knowing I still had 7 miles to go.  That guy who was handing out gardenias.  The little kids who were handing out water cups and Girl Scout cookies.  Thank you!

This entry was posted in Running. Bookmark the permalink.

7 Responses to Thank you Iron Girl!

This site uses Akismet to reduce spam. Learn how your comment data is processed.